As part of the University’s strategy to develop their sporting capabilities, La Trobe University engaged SPORTENG to design Stage 1 of the world-class Sports Park consisting of a synthetic turf football pitch and a natural turf AFL oval.

A 3-stage plan to modernise and extend the University's current Fields of Play capabilities was developed. The ageing local community level cricket and soccer Fields of Play were removed and replaced for the new facilities. The land to the west of the main campus has been turned into a significant regional sporting asset for the local community. With its new innovative research and elite sporting facilities, the University aims to bring national, state and local sports organisations to its complex.

Stage 1, designed and developed by SPORTENG, included a FIFA-1 accredited synthetic turf football pitch, and a natural turf AFL oval with a pavilion with clubrooms, change rooms and function spaces - completed in December 2018.

Stage 2 involved the completion of a teaching and research building and an indoor stadium near the outdoor synthetic turf football field – completed in January 2020.

Stage 3, which began early this year, will comprise separate Centres of Excellence for Football Victoria (and Home of the Matildas) and Rugby Victoria.

One of the first requirements we had to consider during Stage 1 was that the synthetic turf soccer Field of Play had to be FIFA compliant to suit the elite standard of the facility.

The football field was also designed to allow the extension of the field playing surface to continue from the Field of Play to within the teaching and research building facility to be built next to it during Stage 2. Players would be able to practice kicking from inside the building onto the field. The transition between the two courts should be flawless, and the synthetic turf used should be identical.
The goal through Stages 1 and 2 is to achieve an overall sporting complex suitable for local, professional players and students to analyse techniques on and off the field. The research facility is equipped with cameras and sensors recording the player's techniques, providing insightful data. 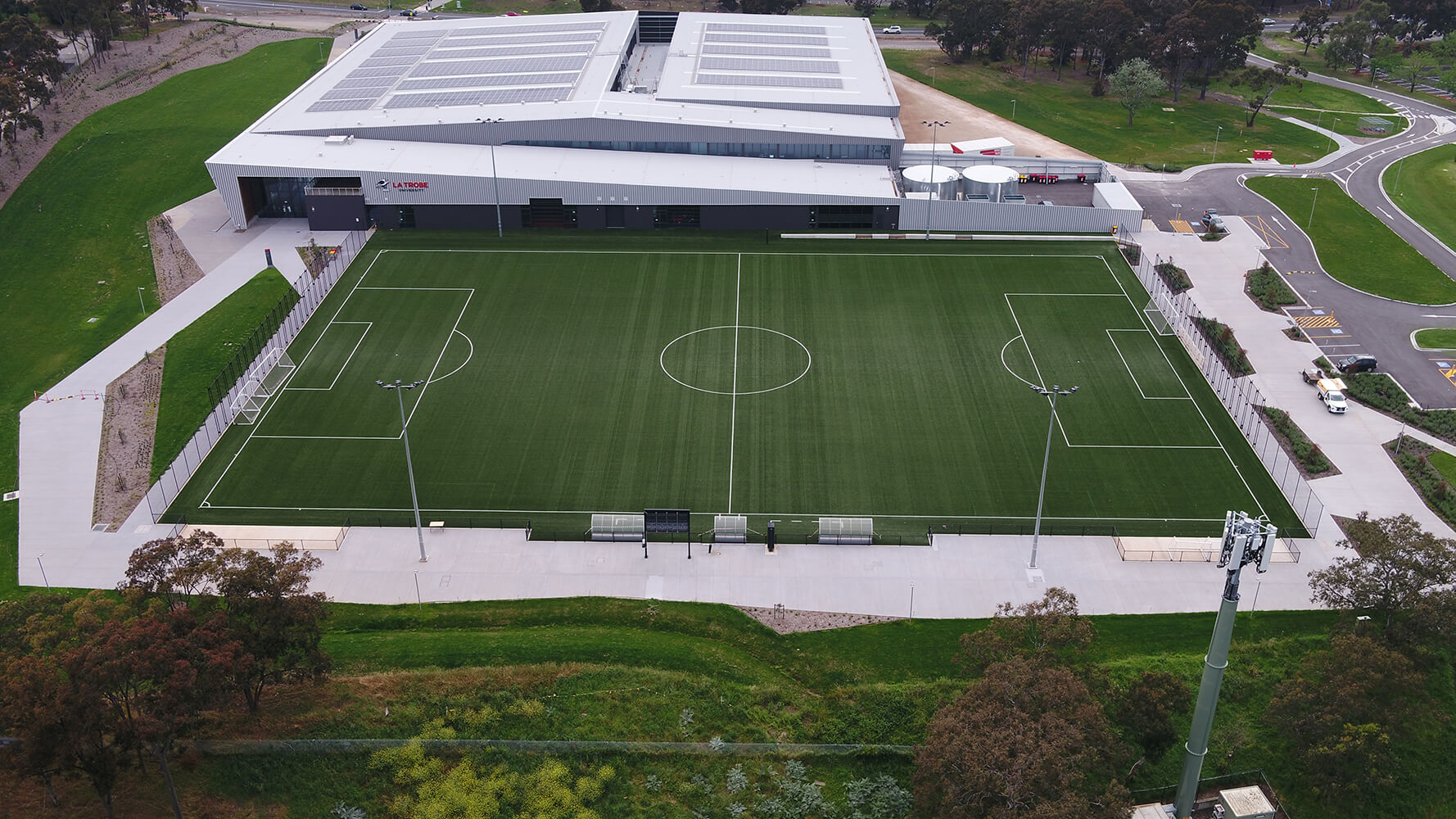 Extension of the synthetic turf Field of Play into the teaching & research facility.

Adjacent to the synthetic turf football field is a new natural turf oval AFL Field of Play. The AFL oval playing surface is the same size as the Docklands Stadium oval, allowing the University to continue its sporting excellence goals. Doing so allowed the University to stay on its path of excellence by offering its users an AFL sized Field of Play with the same high-level AFL standard.
As this Field of Play will experience a high level of use, designing a solution that would enhance the usability and hours of use was essential.

The subgrade conditions were another challenge face by this project.
Comprised of reactive clays, which are subject to volume changes as the clays become wet or dry, it was critical to protect the underlying subgrade from water ingress. Installation of a proper drainage and irrigation system to avoid any saturation of ground, which would translate into an undulation in the surface, was a vital element of the design.

Collaborating with the project architect and wider design consultant team, SPORTENG was able to put in place a smooth and flawless junction between the synthetic turf field outside and inside.

To help with the wear and tear of the natural turf AFL oval, SPORTENG designed the AFL goals square to be movable to manage the effects of overuse on the turf. As this is an area where a lot of wear occurs in the turf, moving the goal square and posts a few meters away from its original position avoids wearing out the grass around the goal's location.
That's why the design is not quite symmetrical, and we can observe an 'offset egg' shape at both ends.

As for keeping moisture out of the reactive subgrade material, SPORTENG designed a capping layer solution to be constructed between the playing surface profile and the subgrade. This layer prevents moisture change to the reactive clay subgrade to keep it from swelling and shrinking. The subgrade is kept dry, and therefore, should keep its original volume and swelling up and deforming the surface.
This has proved to be an excellent solution for protecting the elite surface from deteriorating.

USE SPORTING FACILITIES AS AN ASSET FOR GROWTH

With this brand new world class Sports Park, La Trobe University adds a strong asset to its education facilities. It provides a safe place for students to be active while raising interests and attracting future students.

Fields of Play are fast becoming the jewel in the crown of education facilities. Investing in your sports fields means growth and staying ahead of the front contenders. Watch our video below to learn more! 👇

Thanks to its redevelopment, in 2018 La Trobe University was designated as "Carlton’s exclusive Higher Education partner". Among other benefits, the Club has been training at the La Trobe Sports
Park since 2019.
Source: La Trobe University and Carlton Football Club

A new investment of $101.1 million has been announced by the Minister for Tourism, Sport and Major Events and the Minister for Women.
"In May 2021, Victorian Acting Premier James Merlino; Minister for Tourism, Sport and Major Events Martin Pakula, and Minister for Women Gabrielle Williams announced an investment of $101.1 million into a state-of-the-art facility at La Trobe University’s Sports Park in Bundoora."
This investment is the result of the success the current facility experiences with professional athletes and students.
This investment also allowed the University to pursue its redevelopment by initiating its Stage 3, focused on bringing Centres of Excellence for both Football Victoria and Rugby Victoria.

SPORTENG is currently involved in designing what will become the Home of the Matildas, the Australian National Women’s Soccer team.
Another high-level club, the Melbourne Rebels’ Super W team, chose La Trobe University as their new home, thanks to its new show pitch with grandstand, its two additional pitches and high performance facilities. The club also conduct preseason on both the oval and synthetic pitch.
The National Rugby League Academies also use the synthetic pitch for training purposes.

Sources: Home of the Matildas announcement from La Trobe University

"These pitches have provided a space where La Trobe University are able to balance the needs of student classes, professional sport and community club activity and able to cater for the varying needs of each user group.
We’ve seen demand for our AFL oval from VFL, VFLW and community clubs during preseason to a point where it is at capacity and the synthetic pitch has been a space that can cater for all levels of sport."