The new WestConex M4 tunnels, which passes beneath the western suburbs of Sydney for a distance of 5.5km, opened in July 2019. The half-way point of the tunnels required ventilation shafts to the surface and subsequently the location of the tunnels aligned with the existing Cintra Park hockey facility. WestConnex engaged SPORTENG to undertake the design and documentation for the development of a new hockey facility across the road from the existing in St Lukes Park.

The construction of the M4 tunnel required an exhaust shaft in the location of the Cintra Park Hockey Facility and subsequently the facility, consisting of hockey pitch, pavilion and carpark had to be reconstructed on the other side Gipps Street.

Canada Bay Council required the facility to be a like-for-like redevelopment while also complying with FIH requirements.

It was identified during the geotechnical and contamination testing that the proposed site consisted of less than desirable subgrade material. There was a high level of contamination that required specialised handling to dispose of and the terrain had been built up with uncontrolled fill over the years.

The overall footprint of the proposed site was less than the existing site which meant the layout of the pitch, clubroom and carparking had to be as efficient as possible to get the most from the site. Furthermore the terrain consisted of a 4m embankment that meant equal access was going to be difficult to achieve.

There was no power to the site so a new electrical feed to the site was required to be obtained from the power authority.
Possibly the biggest challenge was meeting the project program. The tunnel construction works needed the site of the old hockey facility to commence the works on the ventilation however they could not gain access to the site until the new facility was constructed and operational and the club can move across without impacting their season.

Both the pitch and the pavilion were located on the elevated part of the site. The pavilion was located to the west of the pitch to prevent issues with viewing due to the afternoon setting sun. The carpark was located at the bottom of the 4m embankment. Subsequently an Equal Access switchback ramp was designed to allow universal access from the carpark to the hockey facility. Additionally accessible parking was located adjacent to the pavilion on the same level as the hockey pitch.

The identified contaminated subgrade material had to be excavated, handled and stockpiled appropriately and then disposed off-site to an accredited landfill.

To address the uncontrolled fill, the depth of exaction was just under 700mm which was replaced with a compacted granular pavement. A Tensar grid was included at the interface between the imported crushed rock material and the exposed subgrade.

The hockey pitch was designed to be a FIH National Standard ‘wet’ pitch which required an irrigation system to apply precipitation across the surface within the FIH stipulated timeframe.
The like-for-like objective meant that a water treatment facility was to be included to treat surface run-off from the pitch and re-use in the irrigation system.

All stormwater run-off from the hockey pitch was captured in a pit and pipe network and discharged to a retention tank. From this tank the water is treated and re-used for the hockey pitch irrigation system.

Our electrical engineer liaised with the power authority to obtain a new power supply to the site which consisted of a new kiosk. From the kiosk power was distributed to the pavilion, pitch lighting and carpark lighting. 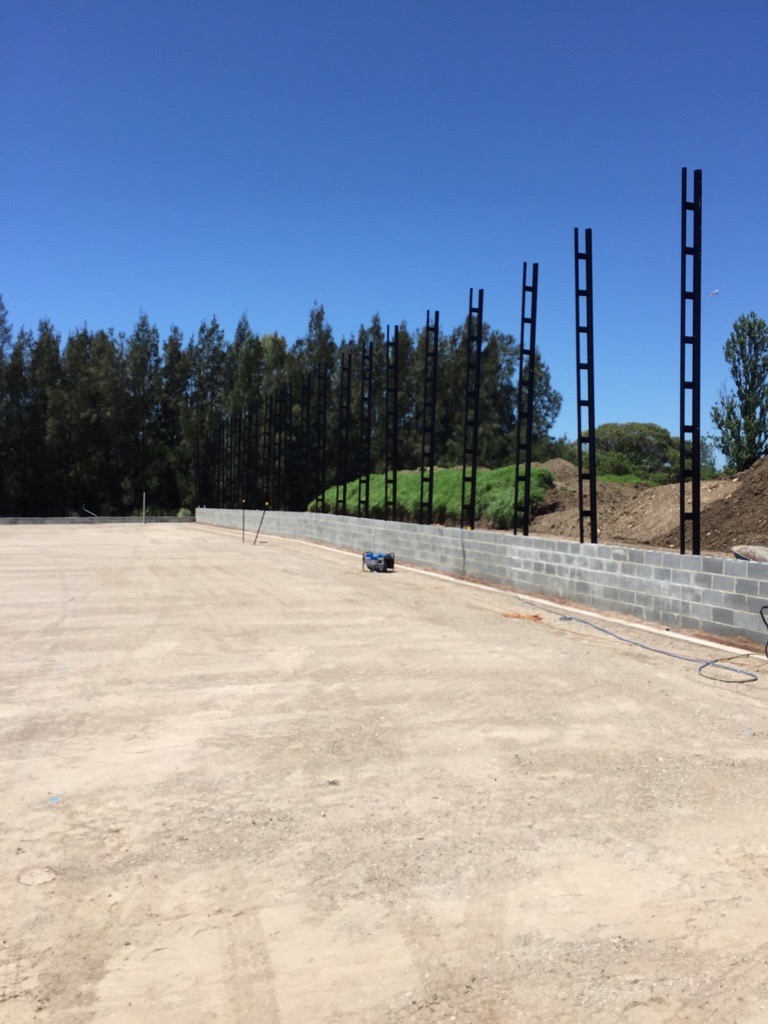 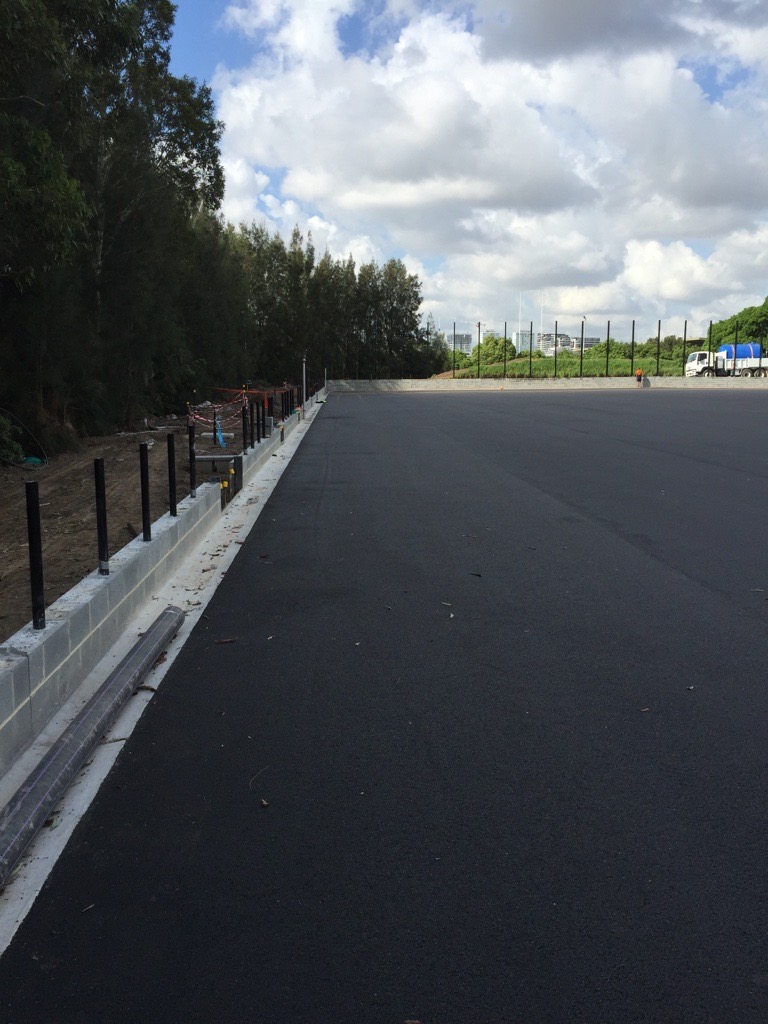 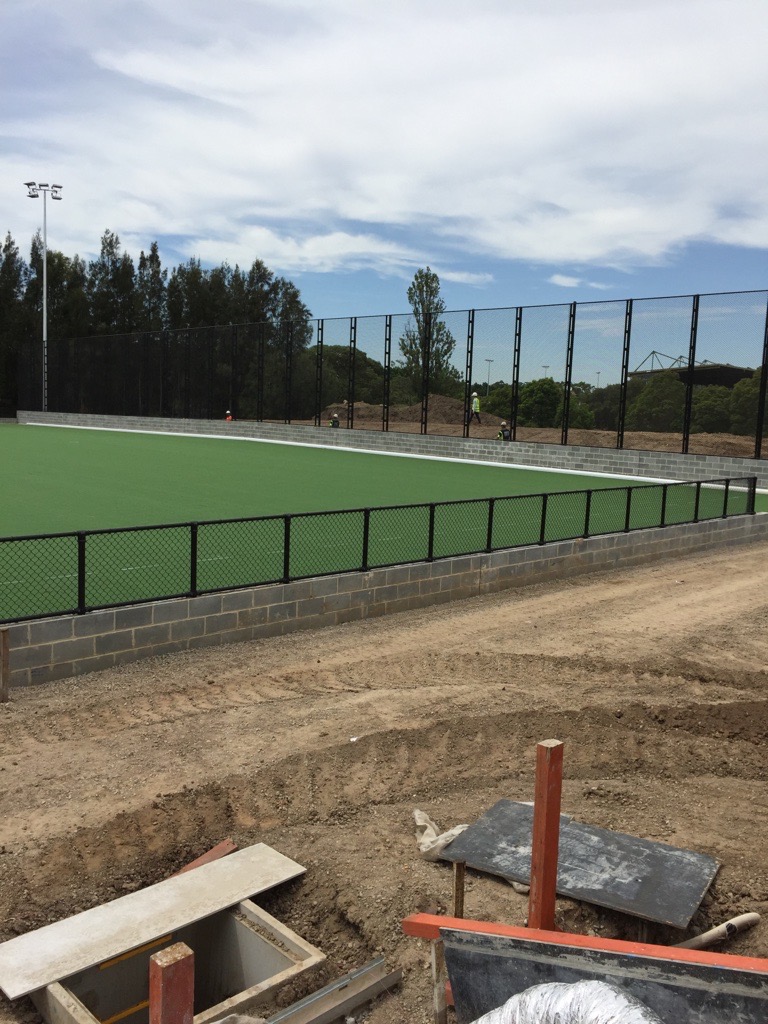 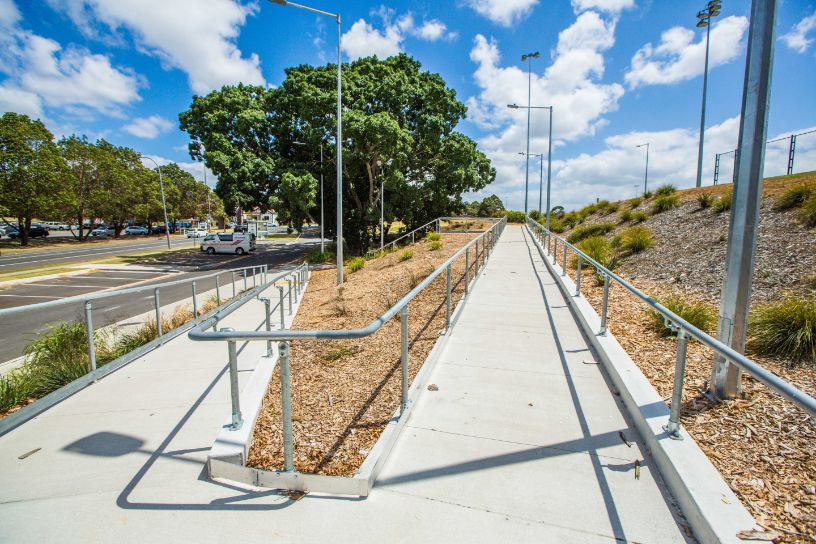 A switch-back DDA compliant ramp was required to enable universal access from the carpark to the pavilion and hockey pitch. 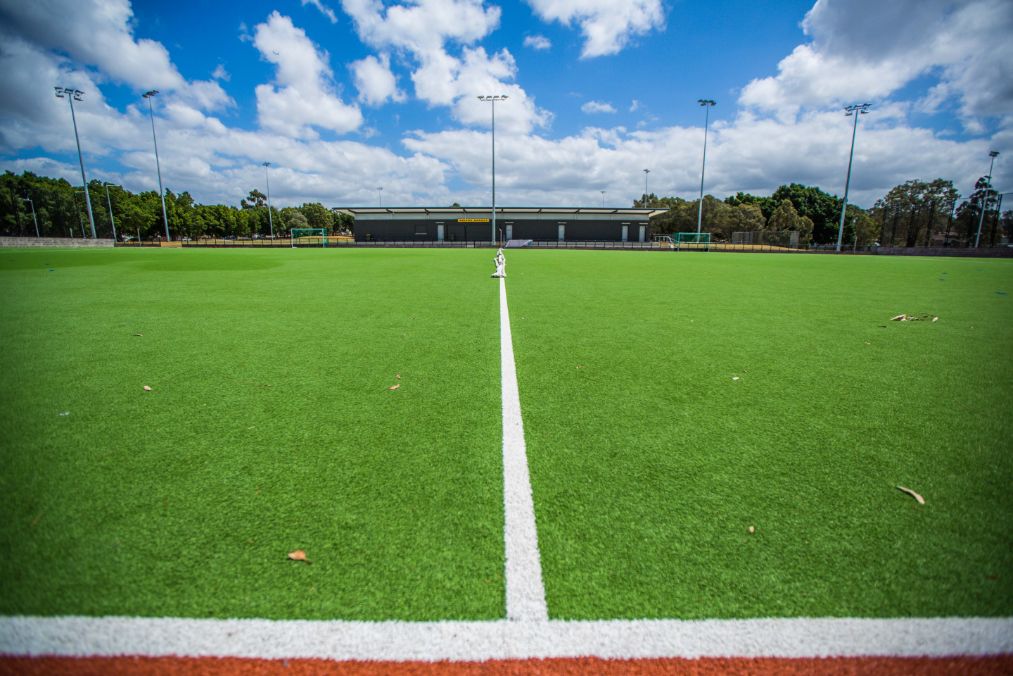 The facility opened in time to enable old facility to be decommissioned and construction works on the exhaust tunnel to commence. The facility was tested and found to comply with the FIH performance requirements and has been successfully used by the Briars Hockey Club since. 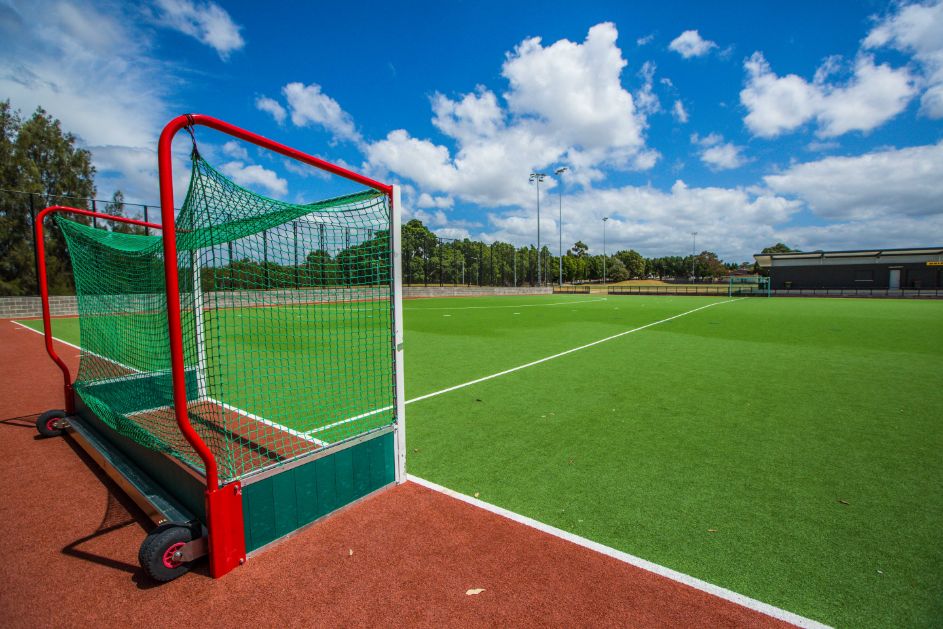 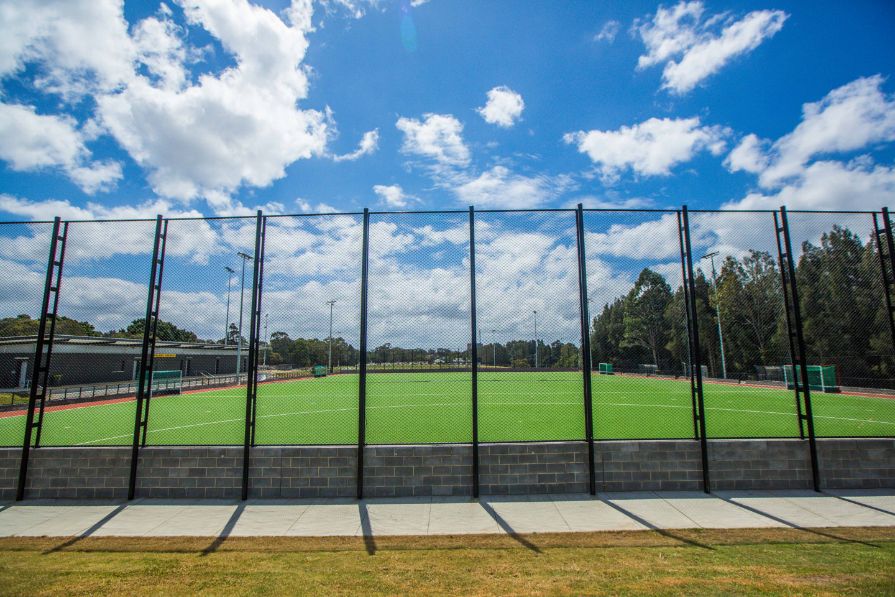 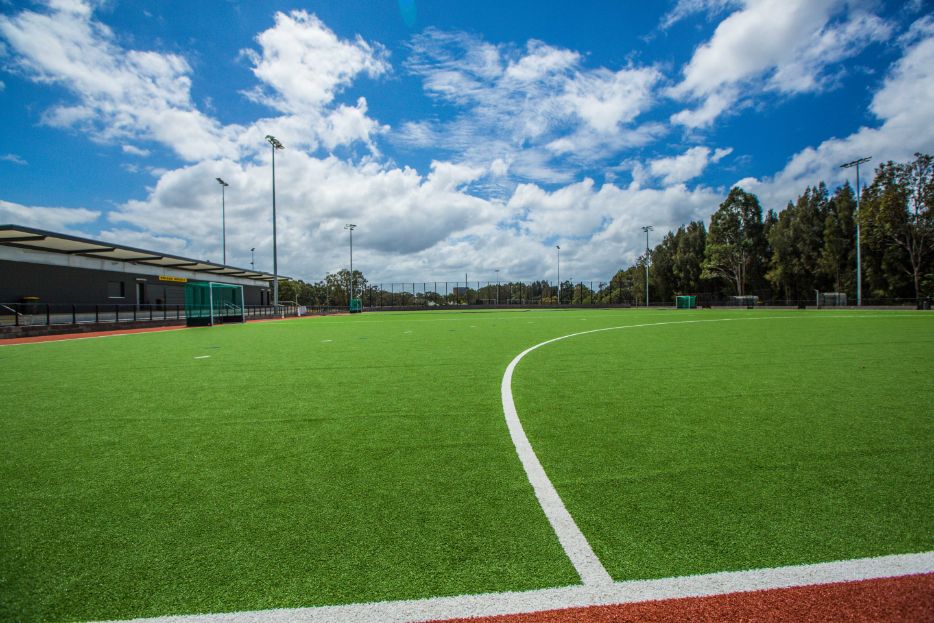 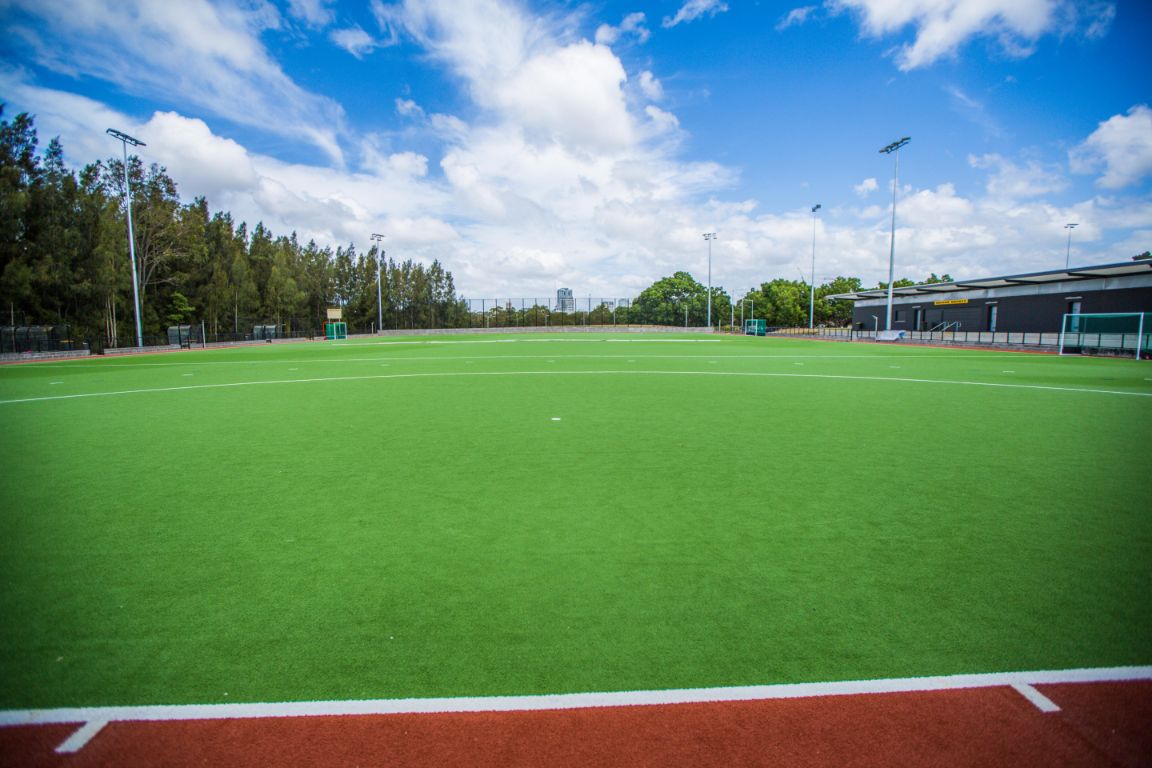