Perched on the cliff's edge at Williamstown, the Williamstown Football Ground (also known as Downer Oval) is often subject to strong winds while offering a terrific view of the ocean. The site is home to VFL side Williamstown Seagulls and includes spectator facilities, a large function room, playing facilities and a natural turf surface.

Since then, both clubs have shared and played all their home games at this historical ground, making them two of Victoria's longest-running sporting clubs co-existing on one of its most iconic sporting arenas.

Fun fact, during its redevelopment between 2010 and 2012, a Crimean War-era military bunker was uncovered beneath the outer!

This historical ground was due for an overall upgrade of its natural turf playing surface. Being home to elite cricket and football teams, the oval experiences a high level of turf wear and tear, which the current oval surface couldn't handle anymore.

Indeed, its drainage quality was worsening, and its soil was in becoming increasingly organic and clogged. Also, an underground water tank, put in during the drought, proved to be unfunctional. As a result, drainage issues started to develop, rendering the surface very muddy, especially during the VFL season, and challenging to play on in general.

"We had low drainage first and foremost, and the ground became unplayable on certain occasions when the weather turned foul on us, and the ground was unable to drain away. […] (The clay base expanding) also left undulations on the ground, and the AFL wouldn't allow us to play games at home (in certain conditions)." CEO Jason Reddick said.

Another issue was that the cricket practice nets testified to a high level of use and needed an urgent upgrade.

However, as the upgrade of the oval was deemed critical, timelines were brought forward a year; as a result, the oval and cricket practice nets upgrades became two separate designs, with the first one already completed and the second one almost achieved.

It was also essential to include a re-evaluation of the oval's level, as it had changed substantially over time due to surface movements.

In overall, there were great expectations towards this new natural turf profile. It needed to meet the elite ground level requirements of being able to welcome VFL games, and potentially welcome AFLW games in near future.

To build up this new elite playing surface, we started by digging out the existing water tank – that used to take up a large part of the field. Doing so, we've been able to reconstruct the whole surface while releveling it at the same time by taking some of the cross fallout and making it a constant fall from one side to the other.

While levelling the surface, we also had to keep the overall dimensions precisely the same to fit the elite game's requirements.

The next step was installing a Perched Water Table rootzone, which replaced the existing loamy soil that didn't drain very well. The inclusion of a drainage gravel blanket beneath the rootzone sand layer facilitates water accumulation at the interface of two material layers and is also free draining. 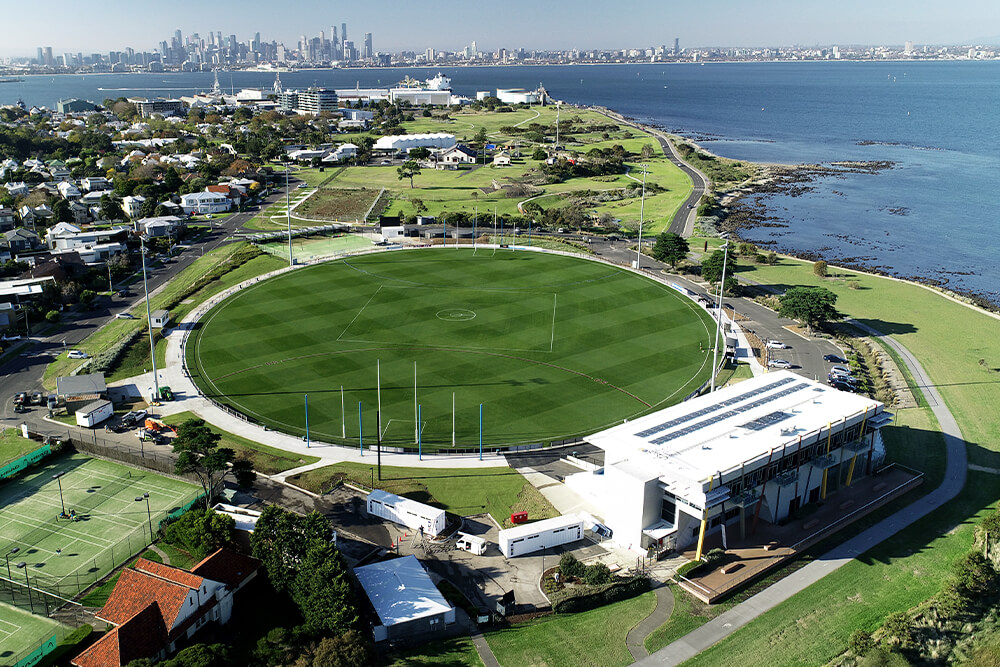 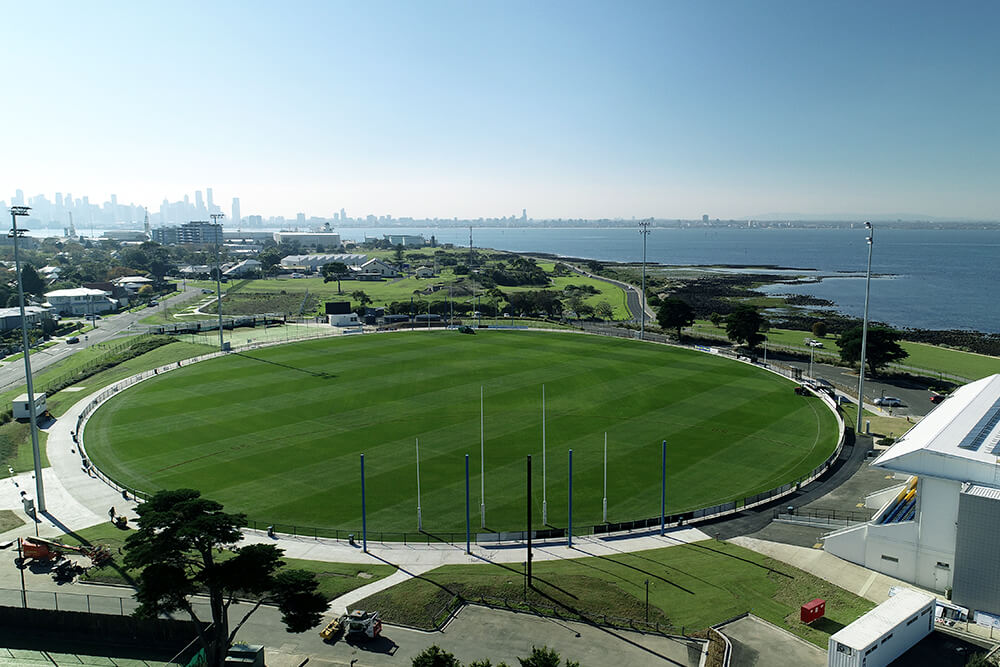 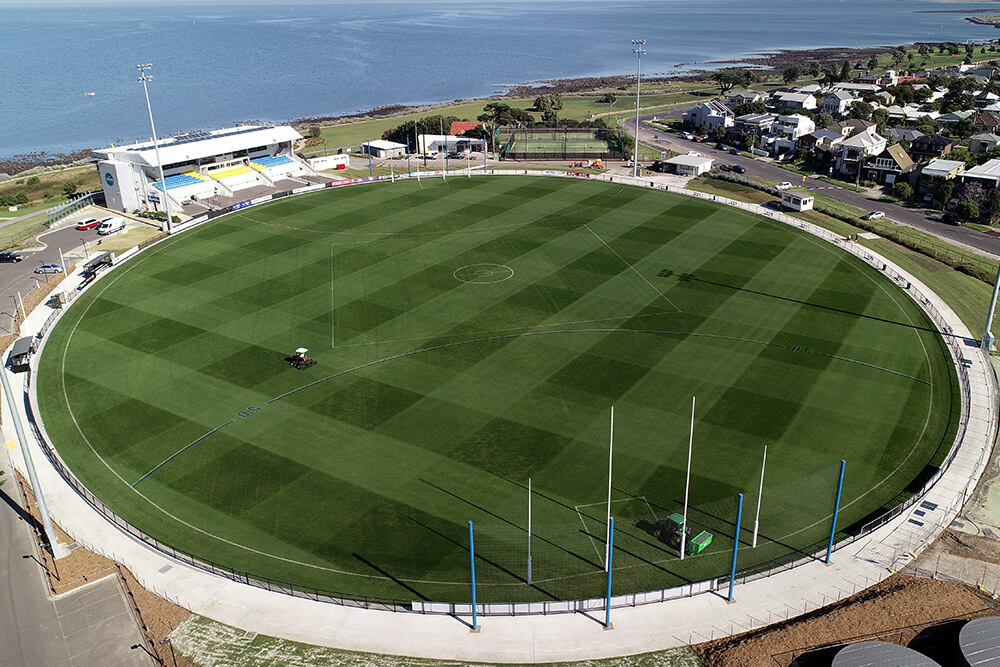 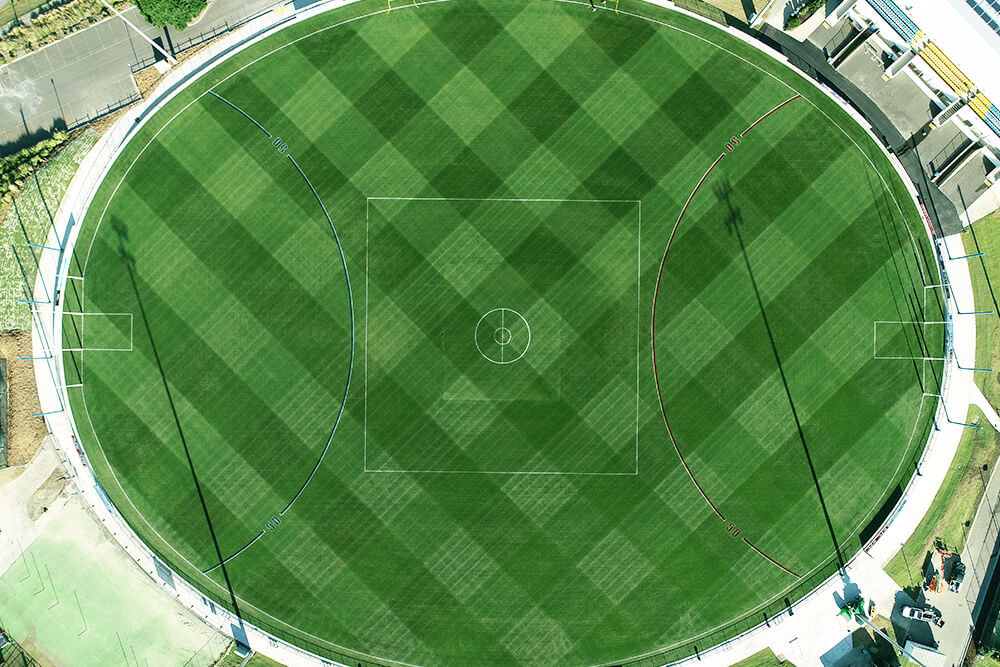 Shortly after Williamstown unveiled its new A-grade facility, the club hosted its first game against its oldest foe Port Melbourne. The game was the 50th clash between Williamstown and Port Melbourne in the VFL era and launched the facility as its traditional first home game for the year.

"This is an important step in our overall master plan to develop Downer Oval so that we can provide suitable facilities for the diverse range of teams, such as women's and juniors, who utilise the ground." Club President Clint Rippon said.

"[…] now we've got a first-class AFL equivalent ground to host games on […] And after the first year when it has settled, the ground will be able to host more games at a community level as well, so it's a great outcome for everyone.

It looks magnificent to me, and I'm super excited, as are all our players and the coaches to finally get on it." Williamstown CEO Jason Reddic said. Developing a home for cricket Victoria